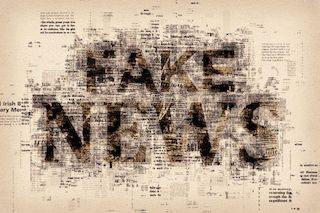 Regardless of your political persuasion or geographic location, there’s a high likelihood that you have at some point been exposed to the phrase “fake news.”  And while the act of questioning the legitimacy of reporting may be as old as news itself, the phrase has taken on a life of its own, appearing as everything from internet hashtags to de facto political rallying cries. The proliferation of social media—and the advancement of the term by everyday citizens and world leaders alike—has barrelled the phrase into the everyday global lexicon.

This isn’t just a battle of terminology, either. A 2016 landmark report by Buzzfeed News is credited with being among the first to show how fake news—the kind that is truly inaccurate—spreads on social media, sometimes even faster than its legitimate counterparts. Fake news can—and is—weaponized, just as the term is weaponized in attempts to discredit legitimate reporting.

The term “fake news” is routinely mentioned in the media across the globe.

This has led newsrooms the world over to experience a crisis of legitimacy. At the same time that global newsrooms are seeing widespread layoffs, reporters are under increasing pressure to prove and defend the accuracy and neutrality of their reporting and to guide their audiences to separate fact from fiction. From the United States elections of 2016, 2018 and 2020 to the ongoing misinformation campaigns surrounding Brexit, both the threat and reality of fake news looms large.

The responsibility to restore and promote global media literacy and to limit the intellectual threat of fake news can’t just rest on the shoulders of journalists, however. Professionals in the field of public relations, for instance, are uniquely positioned to help promote veracity and legitimacy in reporting. As the professional gatekeepers of information, PR professionals have a unique moral and ethical responsibility to ensure they aren’t playing a role in the proliferation of fake news.

Work with the Media, Not Against Them

The relationship between public relations professionals—or really, anyone speaking to the media—and journalists should be one that is mutually beneficial. Whether a professional is representing a public official or publicly traded company, the often-lampooned image of a hostile spokesperson working in opposition to the media is more farce than fact.

Organizations have an interest in providing the public with certain information to help them make informed decisions. Journalists have an interest in providing accurate and honest reporting of the most relevant information to the day to day lives of their audience. These goals are mutually inclusive of one another. Even in investigative reporting that may trigger a so-called PR crisis the benefits of providing an honest, accurate account of the circumstances far outweigh the alternative.

Working with the media in this way can take many forms. Primarily, this means proactively and positively sharing valuable information relevant to the media outlet’s audience. It could also mean connecting reporters with additional sources to add depth and perspective to their research. It’s equally important to correct misinformation quickly and in the moment—but that pertains only to facts, not opinions. Even if you feel a story has missed the mark, a responsible public relations professional will attempt to correct the record before going on the offensive to issue blanket attacks on the news organization as a whole. When people are led to believe that all news is fake news, we all lose.

Truth, Above All Else

Nearly 70 percent of the general public distrusts public relations professionals, according to research conducted by the United Kingdom research firm Reputation Leaders. This legitimacy crisis is worse than trust in the media; similar studies of media trust show close to 50 percent of respondents distrust the news they receive. While both professions have a long way to go to gain public trust, clearly that hurdle is much steeper for public relations professionals.

Especially in the age of fake news, veracity should be just as important to public relations professionals as it is to journalists. A PR pro who has been labelled as less-than-trustworthy has lost their professional credibility and tarnished the reputation of the organization or individual they represent. When this happens, the goal of public relations—to connect the public with relevant information—can’t be achieved.

If sharing accurate information with reporters is meets expectations, providing the source of that information is a valuable next step to help reporters and establish credibility. Ultimately, journalists may use their own methods for verifying the information shared with them but being upfront with your source material is a valuable way to eliminate duplication of work and to back up your claims.

This also means avoiding the urge to repeat unverified claims, even if they’ve been repeated multiple times in the past. Statistics should be linked to original quantitative research and testimonials should be attributed to a primary source. Think like a reporter and monitor the news  in your industry to understand conventions for attribution. And if you can’t find the source for a claim, don’t repeat it. Use this as an opportunity to commission a study of your own and share the results accordingly.

The job description of a public relations professional, marketer, corporate executive or any other professional to favourably represent their organization or brand cannot outweigh the professional responsibility to be truthful, accurate and accountable. The ethical role of all professional communicators is to share your side of the story, not your own alternative facts.

Share this
Related Products
Get in touch
E-mail: information@lexisnexis.com
Telephone number: +971 (0) 4 560 1200
Reasons to get in touch