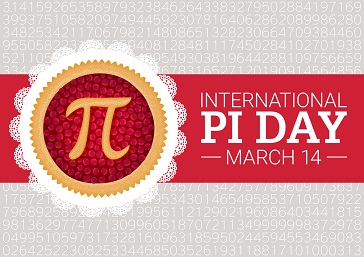 In school, we all learned about Pi, the number that sets the ratio between a circle’s diameter and its circumference. It’s a mathematical constant captured in the iconic formula ofπR2.

While the actual number Pi is infinitely long, it’s first three digits, you’ll recall, are 3.14, which is why March 14 has been established as International Pi Day.

In our data- and algorithm-driven world, it seems only appropriate that we set aside a day to celebrate numbers and all manner of nerdy stuff. So we turned to Nexis® Newsdesk to find some content that might inspire you or your company to get your geek on and do something special on Pi Day.

Math Can Be Fun - Or at Least Funny. There’s no beating Pi Day when it comes to sharing your best math jokes. Help spread some Pi Day laughs by sharing such classics as: “Why wasn’t the geometry teacher at school? Because she sprained her angle.” And “How do mathematicians scold their children? If I told you n times, I’ve told you n+1 times…” You’ll find more math-inspired humour in this piece from Reader’s Digest Canada.

A Day to Honour Math Teachers. Do you have a math teacher who made a difference in your life? Pi Day is the perfect day to send an email or social media message thanking him or her. But don’t expect an immediate response, as many math teachers attend conferences and special events on Pi Day. For instance, Aga Khan University Institute for Educational Development in Pakistan is hosting an online teachers’ conference that day.

Math in the Movies. A great way to celebrate Pi Day is to get cozy on your couch with some snacks (might we suggest pie??!!)and watch a film inspired by real mathematicians. There are plenty to choose from: consider “Hidden Figures” about a team of female African American mathematicians who worked for the U.S. space agency, or “The Man Who Knew Infinity” about pioneer Indian mathematician, Srinivasa Ramanujan, and his friendship with his mentor, Professor G.H. Hardy.

Pi Can Add Up to Good. The convenience store chain 7- Eleven is selling large pizzas for, you guessed it!, $3.14, with a portion of the sales benefitting Feeding America, the country’s largest organization focused on hunger relief. Lots of organizations, such as youth clubs and schools, sell pies on Pi Day to raise money for their programs.For instance, the UK-based the Raspberry Pi Foundation, which teaches kids online coding and ways to get creative with technology, just launched its first Pi Day fundraising campaign.

More Geeky Reasons to Celebrate. Pi Day also happens to be Albert Einstein’s birthday. Check out this Medium post that features some rare childhood photos of the man who revolutionized physics. And while we’re on the topic of geniuses, here’s an interview in The Verge with someone who’s been called “the next Einstein.” This present-day, billionaire brainiac is shaping the technology behind self-driving cars. And, wouldn’t you know it, he was born on Pi Day, too. What are the odds? (Yes, we know: 1 in 365.)

However you choose to celebrate Pi Day, we hope it brings you joy without end. (Pun intended.)