Looking Back: 23 Global Headlines from the Past Decade 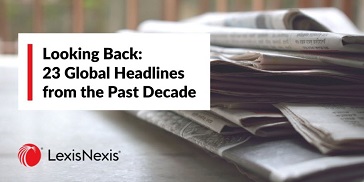 What a decade it has been. Across the planet, major stories broke in politics, culture business, sports, entertainment and science. Here are just a sampling of some of the news items from the past decade—capturing humanity at its best and its worst¾that garnered attention around the world. (Our apologies if an event that you found particularly heartwarming or heartbreaking isn’t referenced here in this short list. You can, of course, find all of the headlines of interest using the Nexis® database with more than 40,000 sources going back throughout the past decade and beyond.)

There’s no stopping Mother Nature and the past decade proved that far too often. Aided, in some cases, by human fallibility, the forces of nature packed quite a punch that still hurts.

Exciting the Geek in All of Us

Everyone has at least some nerd in them. After all, we live in era drenched in technological and scientific progress. Here are some of the geeky events that had us all saying, “Now, that’s cool!”

Some Big News Came from Underground. And from the Sky.

Some of the biggest human-interest news stories of the past decade happened below our feet and above our heads.

We Wish It Would End, But It Hasn’t

As tempting as it is to ignore all the horrific, terror-related news, we realize looking away doesn’t erase it. More importantly, turning a blind eye toward it will do nothing to stop it.

There’s a certain quaintness in taking time to look back—especially in milestone moments like the turn of a decade. It’s The this ability to track and research global news stories even years after they’re published that makes Nexis® a valuable tool for researchers, reporters and business intelligence leaders.