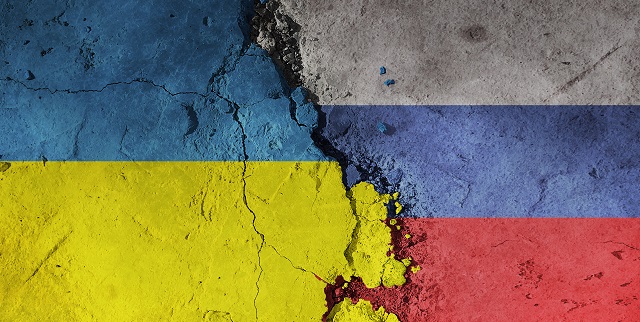 DISCLAIMER: It is difficult to accurately measure the number of stories, reach and sentiment of media coverage within Russia, as many media outlets are controlled by state-run news agencies and/or are under restrictions during this time.

It should come as no surprise that the Russia-Ukraine conflict is dominating the international news cycle. Since Feb. 21, more than 30,000 stories have been published by the world’s media, reaching just over 1.28 trillion people. To better understand this fast-moving, ever-evolving story, we ran a Nexis Newsdesk™ search on Wednesday, March 16, using the subject tag “Russia-Ukraine conflicts,” which leverages LexisNexis® SmartIndexing Technology™ that automatically categorizes incoming news against thousands of subject, location, and people terms. We then used Nexis Newsdesk™ to dig deeper into the results. Here's what we learned.

What are the Spikes in Coverage?

The biggest spike in coverage occurred on Feb. 24, when Russia invaded its neighbouring nation. While most of the 56,000+ stories logged that day focused on Russia’s invasion, other topics included eroding consumer confidence (Irish Examiner) and rising oil prices (Trend News Agency, Azerbaijan).

A deeper look at the coverage also clearly demonstrates how regional, cultural, economic and geo-political differences can play a role in how news is reported. For example, headlines from Kazakhstan—which shares a southeast border with the Russian Federation—have mainly covered regional economic fallout from the conflict, as this article from Kazakhstan Newsline demonstrates. Coverage in the U.S., on the other hand, has largely focused its criticism on President Vladimir Putin, as seen in this New  York Times article.

A second spike occurred on Feb. 28, when more than 39,000 stories were published. By then, coverage had shifted from factual reports of the invasion to more human interest and broad-ranging macroeconomic trend-related stories. Among the headlines were reports from refugees who escaped Kyiv (Intellinews -  Ukraine), continued analysis of economic volatility, predictions on Ukrainian resettlement efforts (Toronto Star), ongoing Russian sanctions, and criticism of world leaders’ responses to the invasion.

The third most significant spike was on Monday, March 7. Nearly 25,000 stories were logged that day, driven by the rise in U.S. gas prices (New York Times) and deepening economic worries (Early Times – India).

Who is Mentioned in the Conversation? 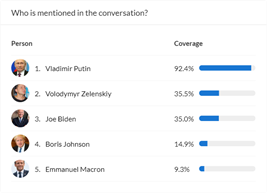 Many of the headlines surrounding international diplomats have trended negative in sentiment—with the exception of Jens Stoltenberg, General Secretary of NATO. His is the only name that has garnered slightly more positive coverage than the rest of the personalities mentioned by the world’s media, with almost one-third of related coverage trending positive.

In Times of War, There’s No Good News

While media coverage should, in theory, almost always remain neutral, nearly 34% of Russian-Ukrainian conflict media coverage currently skews negative. When we completed our analysis, trending headlines included President Zelensky’s plea for help from the U.S. Congress (The New Zealand Herald); coverage of the International Court of Justice’s order for Russia to halt its invasion (The Guardian); speculation on what will happen if Russia takes over Western companies’ stores and factories (Deutsche Welle);  reports that Russia had blocked Facebook amidst what it calls dissent (Newsweek)  ; and reaction to U.S. Senator Lindsey Graham’s extremist calls for Putin’s assassination (New York Magazine).

Still, there are stories of hope and human resilience emerging. Take, for instance, this March 11 article on the safety and compassion Ukrainian refugees were finding in Poland (Yahoo!), which ranked as the most popular piece of content in our analysis. Then there was International Paralympic Committee president Andrew Parsons, who used his opening ceremony remarks to call for, “dialogue and diplomacy, not war and hate.” (CBC Sports). Cleveland.com shared how the U.S. city’s popular Elevation live music festivals aim to raise $100,000 for Ukrainian humanitarian assistance. And the Nigerian Daily Post reported that Mr. Eazi, a Banku music star, donated 5 million naira to help African students stranded in Ukraine.

There has also been swift response from individuals the world over. In addition to philanthropic forces—such as family foundations, companies and celebrities—mobilizing to support Ukrainians, ordinary people have been vocal. This includes more than 4 million people from 196 countries who have signed petitions in solidarity against Russia’s actions.