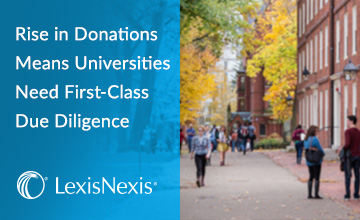 Universities in the United States received a record $43.6 billion in donations from individuals, companies and organisations in 2017. But recent scandals show that universities must not neglect due diligence on the source of these donations.

2017 was a record year for donations to universities, according to a new report from the Council for Aid to Education. With $43.6 billion raised, philanthropy is now a key source of income for higher education institutions. Unsurprisingly, Harvard came top of the class with $1.28 billion earned. But even Indiana University, in 20th place, brought in nearly $400 million. Most universities now have well-resourced teams of fundraisers who travel the world trying to persuade wealthy individuals and organisations to donate.

More money brings more risk. Universities are focused on teaching and research so they might not consider due diligence a priority, but they should. $19.2 billion was given to universities by individuals last year, and $6.6 billion from companies. It is essential that universities learn as much as they can about the source of their income, carrying out enhanced due diligence for individuals and companies considered to be higher risk.

A good illustration of the risk of accepting donations is the negative media coverage about the Sackler family late last year. An article in the New Yorker alleged that a company owned by the Sacklers played a role in fuelling America’s opioid crisis. The family have made significant donations to more than a dozen universities and their name adorns buildings at Harvard, Columbia and Oxford universities. The opioid scandal meant these universities suffered reputational damage in the media, and faced tough questions from their students, alumni and other supporters.

Universities’ fundraising teams should be particularly careful when they are offered money by Politically Exposed Persons (PEPs), or people who have business relationships with PEPs. The prominent public position of PEPs makes them more vulnerable to receiving money from bribery and corruption in exchange for their influence. It might therefore be attractive to a PEP to improve their global image by using this money to fund a new building at a respected university. While many PEPs made their money legitimately, universities should nevertheless carry out enhanced due diligence on PEPs to mitigate reputational, regulatory, financial and strategic risk.

A recent trend in business is that investors and customers are more willing to use their influence to encourage a company to behave ethically. The same phenomenon is happening in higher education. In August, a professor resigned his position at Oxford’s Blavatnik School of Government because he objected to the actions of the school’s main donor Leonard Blavatnik. The same month, 85 students and academics at the University of Utah wrote a letter to the university raising “serious concerns” about its decision to accept a $10 million gift from the Charles Koch Foundation. The success of a university depends on its ability to attract top students and academics, so retaining their trust by doing thorough due diligence on donors should be a top priority.