Use Research to Untangle the Web of Conglomerations 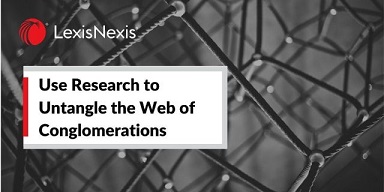 It’s widely held that competition within industry is a force that protects consumers. It’s often believed that when one organization controls an entire industry, the consolidation of power results in an unfair advantage between the general public and a monopoly. This is codified into law around the world. For example, the United States has anti-trust laws and the European Union has a variety of competition laws enforced through the Treaty of Lisbon.

But monopolies are different than conglomerations. While a monopoly has an unfair hold on an entire market or industry and uses that power to harm consumers, a conglomeration pools a company’s resources to spread across a variety of industries, services and markets. This has historically resulted in situations where electric companies own television stations and companies traditionally known for producing consumer packaged goods assume ownership of television and cinematic awards shows.

It’s important for business development professionals to understand conglomerates and do their research to identify and unravel the web of corporate hierarchies it may create.

The Nature of Conglomerates is Always Shifting

Like many things in business, ownership hierarchies of conglomerations are anything but static. In fact, ownership of certain brands and organizations can shift back-and-forth many times over. In the United States, for instance, the oldest major broadcast company, NBC, has been owned by General Electric on at least two distinctly separate occasions. Battery company Duracell has been, at different times, owned by Berkshire Hathaway, Proctor & Gamble, Gillette and three other lesser known companies.

Even as a whole, the overall outlook on the effectiveness of conglomerates ebbs and flows, and the exact makeup of what a conglomerate looks like has shifted through the years.

Having access to research a depth and breadth of historical reports and news articles on the mergers, acquisitions and joint investments that comprise the DNA of conglomerates can be vital for business development professionals to understand and track the pulse of conglomeratization today and into tomorrow. It can also provide hints into the company culture of potential business partners, allowing a well-honed approach to relationship building.

Conglomerates Can Be Hard to Pinpoint

Conglomerates are by no means inherently good or bad, but they can certainly be hard for business development professionals to monitor. On the surface, it can be virtually impossible to identify two distinct brands who fall under the same inter-industry conglomerate.

Even when conglomerates own multiple brands at different segments of the same industry, it can go unnoticed by others. German automaker Volkswagen, for example, also owns—either wholly or in part—automotive nameplates Audi, Bentley, Bugatti, Lamborghini, Porsche, SEAT and SKODA. Many consumers splurging to buy a Bugatti may be unaware that the brand’s corporate lineage can be traced back to the same manufacturer as the Volkswagen Beetle.

Before going into any new relationship—whether that’s a strategic partnership or new business lead—it’s important to know as much about the other party as possible. This requires digging a little deeper than the surface-level branding.

This is easier said than done, and sometimes can’t even be determined through any traditional consumer-facing content. Ownership between a brand can pass through multiple subsidiaries before arriving at the ultimate parent company, and this can often only easily be tracked through legal and financial filing. Nexis® Dossier simplifies this type of research with its Corporate Hierarchies feature, which automatically pulls all levels of corporate ownership into a single listing by skimming a variety of sources to arrive at a definitive “family tree” of conglomerates.

We can’t predict the future of conglomerates or know what companies today may join forces with other industry players to form the next big company of tomorrow. With the right research tools, however, business development leaders can be better equipped to tackle the weaving web of corporate ownership.