What is New Media? The Real Life Impacts of Digital Media 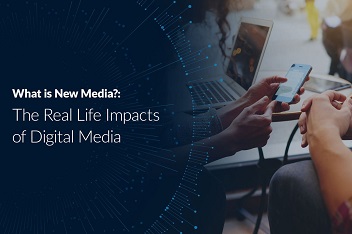 The introduction of the internet and, later, smartphones has fueled the rise of a new type of digital media, ranging from blogs and comment boards to vlogs, podcasts, social media influencers, and beyond. And as each of these emerging channels began to gain influence on consumers, they’ve almost universally been met with intense skepticism.

Are they a flash in the pan? Do they have a negative impact on society? Are they the root cause of the public’s growing mistrust of traditional journalism?

Regardless of the answers to these questions, there’s no denying that “new media” is here to stay—and its impact is growing with each passing year. These new (or, at least, new-ish) channels have fundamentally changed how we consume news and entertainment, expanding subcultures to the masses, solving crimes, and inspiring thorny conversations about privacy and misinformation along the way.

As the so-called “new media” and “legacy media” become more and more intertwined, both have important lessons that can be learned from the other, especially when it comes to the importance of research and analytics. In this blog series, we’ll explore four of these lessons, diving into real-world examples of each—and we’ll show you how Nexis’s tools can help you adapt your research and analytics methods to keep up with the ever-changing environment.

New media has an IRL impact

New media isn’t something to scoff at or dismiss. Plenty of newer media forms, like podcasts and blogs, have made huge waves in real life (IRL)—in some cases, delivering long-overdue justice by effectively using news archives and investigative journalism.

In the popular investigative journalism podcast Serial, the serialized audio narrative focused on the 1999 killing of 18-year-old Hae Min Lee in Baltimore and the conviction of her ex-boyfriend Adnan Syed, who maintained his innocence of the crime. Syed was convicted of first-degree murder and sentenced to life in prison. Once he was behind bars, the case was considered closed, and the community moved on.

In 2014, however, Serial’s host Sarah Koenig made the case the focus of the podcast’s first season, spending twelve episodes detailing Lee’s murder, the ensuing investigation, the other suspects interviewed by law enforcement, and the process of Syed’s trial through extensive research and interviews.

Koenig’s dogged research also catapulted the case into the public limelight, stirring renewed interest in Lee’s murder and the many major problems with the state’s case against Syed from investigators, lawyers and true crime enthusiasts alike.

Serial was one of the first truly viral podcasts, reaching 1 million downloads per episode just four weeks after its release. As of September 2022, the first season has been downloaded 300 million times—and all this attention had a real impact. Because of their findings, courts re-examined the case, revealing evidence pointing to Syed’s innocence, and on September 19, 2022, a Baltimore judge overturned the conviction. Adnan Syed was freed after 23 years in prison, thanks in large part to Koenig’s podcast and thorough research.

In addition to delivering long-overdue justice, new media have played a critical role in reinvigorating stalled criminal investigations. One of the most notable recent examples involves a decades-old cold case in California.

True crime aficionado and writer Michelle McNamara began documenting her investigations into unsolved murders on her personal blog True Crime Diary back in 2006. It was here that she began reporting on the crimes of a person she dubbed the “Golden State Killer.”

The Golden State Killer was also known as the Visalia Ransacker, the East Area Rapist, and the Original Night Stalker, and law enforcement from several jurisdictions worked for years to identify and apprehend the culprit. But despite being one of the most prolific serial killers in the U.S., the murderer eluded capture for decades.

When blogs solve a crime

The Golden State Killer made his debut on McNamara’s website in 2011. Over a series of posts, McNamara—working with a retired detective and a small army of online true crime enthusiasts— detailed the gruesome particulars of his California crime sprees. She also interviewed survivors and retired investigators and mused about the possible suspects and motives. Her work landed her an article in L.A. Mag as well as a book deal.

McNamara, unfortunately, passed away in 2016, near the tail end of her investigation and before she was able to finish her book. But her research and reporting, fully compiled in her posthumously published work I’ll be Gone in the Dark, has been lauded as a major reason law enforcement apprehended the killer in 2018. Meanwhile, McNamara’s reporting was immortalized and released as a documentary series on HBO.

Quality research and the lasting impact of new media

While new media like blogs and podcasts may have initially been dismissed in the early 2000s as passing fads, there is no denying the very real and lasting impact they’ve made in our society, especially in the realm of justice and the legal system.

This, of course, was only possible because of the thorough and accurate research done by the reporters. Without their commitment to getting the facts straight, neither Konig nor McNamara would have been as successful.

Doing this level of research takes the right tools—beyond a simple Google search. While a simple search can provide countless articles on any topic, you may have to weed through duplicate articles, opinion pieces, or unfounded noise.

Fortunately, you can ensure that your research is accurate and exhaustive by using Nexis®. At the click of a button, you can find a credible source on any topic from over 45,000 resources. Nexis provides quick and easy access to news archives that go back 45+ years, giving you unprecedented context and background on people and events, so you can verify your story and make the media impact you want.