As a leading global provider of information and analytics, we shine a spotlight on the innovations of the past and present and help create data-based projections of what the future might hold.

Who is it meant for?

Reveal Insights on Any Patent Portfolio

Improve innovation with a clearly defined business strategy that is connected to IP and alerts for new entrants and potential partners.

Base decision-making on the measurement of true patent portfolio strength and competitive factors while relying on industry proven KPIs to track progress.

Pinpoint disruptive innovations and promising startup companies with analytics that help you gain a competitive edge.

With analytics on all patent portfolios in all technologies, you can both evaluate your most valuable patents for licensing and identify potential licensees.

Benefits at a Glance

The Patent Asset Index™ (PAI) takes into account both the number of actively protected inventions and their quality. The method has been developed and validated in scientific research and has been used for several years by leading companies in many industries. Patent Asset Index™ is the total strength of a patent portfolio. It is derived from reviewing the Technology Relevance™ and Market Coverage™ of a company’s patents to understand the Competitive Impact™ of a portfolio. 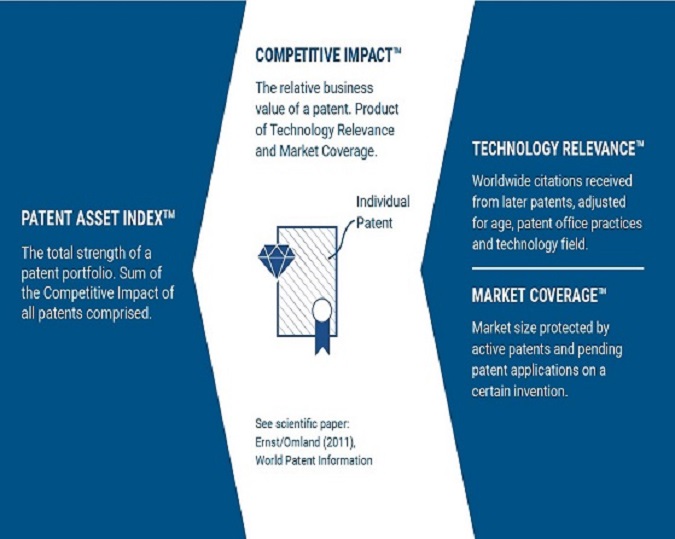 The Patent Asset Index takes into account both the number of active protected inventions and their quality. The method has been developed and validated in scientific research and has been used for several years by leading companies in many industries.

The standard quality KPI for patent strength in investor communication.

"The method is valuable not only to demonstrate the importance of our patent portfolio to investors, but also to internally evaluate our patent strategy over time."

Member of the Board of Executive Directors, BASF 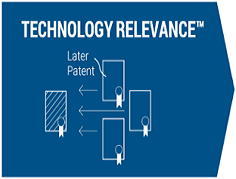 Technology Relevance is based on forward citations. Patent offices investigate all patent applications to reveal on which prior patents new inventions are based. If a patent is of significance for the technical development in a field, subsequent patents will build on it and patent offices will frequently cite it as prior art. 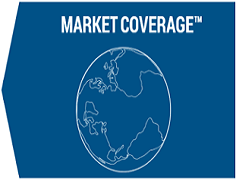 Thus, the scope of international patent protection is an important indicator of patent value. Market Coverage is calculated based on granted and pending, hence valid patents per country adjusted for each market’s size. The size of each market is estimated using the countries’ gross national incomes relative to the US gross national income as the largest global economy. Alternatively, Market Coverage may also be calculated based on industry-specific market size data.

The economic value of the patents as measured by its Technology Relevance and Market Coverage. Competitive Impact is stated relative to the other patents in the same field (e.g. a value of three means that the patent is three times as important as the average patent in the field).

The Patent Asset Index methodology is based on many years of scientific research and validation studies. It is published in an academic journal for review (Ernst and Omland, 2011). Patents with high Competitive Impacts have higher values when compared to a randomly chosen control group of patents. As stated above, the indicators may be calculated for any selected group of patents, e.g. single patents, firms’ patents belonging to single business units, entire firms’ portfolios, multiple firms’ patents, patents from entire technological fields, entire countries’ patents or any other patent selection.

The measure of overall patent portfolio strength. Calculated as the sum of the Competitive Impact of all patents contained in the portfolio.

Excellent data quality is the foundation

To guarantee the reliability of analyses based on the Patent Asset Index, PatentSight maintains a high quality database. Patent data is harmonized and integrated from more  than 90 patent offices and complementary sources that  cover e.g. litigation activity, technical standards, or  medical uses.

The high data quality is achieved by employing a combined software- and human research-based process to prepare, harmonize and integrate the data. Continuous data validation studies with clients show that the database we maintain reliably identifies all worldwide patents on the same invention and that we determine the actual current owner and legal status of each patent with exceptional precision.

Based on the Patent Asset Index, PatentSight offers a Business Intelligence solution that helps board members, investors, portfolio managers, technology scouts, patent professionals and other stakeholders to understand and increase the value of patent portfolios and to uncover trends and disruptive innovation worldwide.

It is also used by the European Commission to validate merger cases, such as that between Dow and DuPont in 2017.

7 out of the top ten most innovative chemical companies by R&D spend use PatentSight and the Patent Asset Index™, e. g. for investor communication and patent strategy evaluation.

There is a high need for advanced analytics in automotive due to fast developing new technologies, e. g. e-mobility and autonomous driving and new players in the market.

Organizations calculate the PAI for each of their technology fields to look at the market share and technology strengths of e. g. merging parties.

Intuitive to use and completely customizable 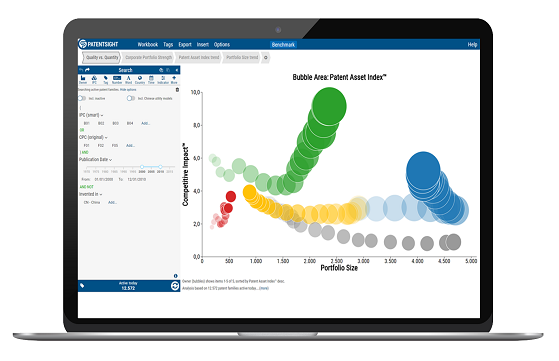 Answers to some popular questions

How can patent benchmarking be carried out to gain competitive information?

Patent Benchmarking is the process of evaluating your own position in the market in terms of your intangible assets in comparison to your competition. This analysis can easily be conducted using LexisNexis® PatentSight®. Read More here

How can patent developments and trends be recognized at an early stage?

Patent Research Softwares allow a comprehensive research to study market trends, niches and new developments in technology and product. This will help you keep yourself updated in your research. You can use LexisNexis® PatentSight® for this. Read more here.

Which patent research is relevant for company acquisitions?

Patent research that informs you about upcoming technology plays an important role in M&A prediction models and elimination of incompatible bidders. Thus, conducting a patent analysis as a predictive indicator helps with Company Acquisitions. LexisNexis® PatentSight® is an excellent tool to help you with your patent search. Read more

How can patents be optimized or improved ?

Ensure your invention has patentable subject matter and fulfils the criteria of being a patent (new, non-obvious, useful)

Prepare a provisional patent application and file it with the authorities

Track the status of your patent application

Do your patent search with LexisNexis® PatentSight® Read more

How can patents be monetized?

There are many ways of monetizing a patent, here are some of them:

Get in touch
E-mail: information@lexisnexis.com
Telephone number: +31204853456
Reasons to get in touch