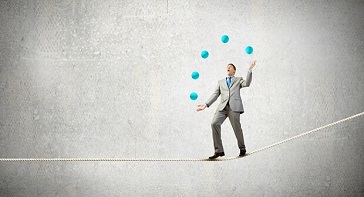 There’s no room for clowning about when it comes to risk management and maintaining the integrity of international business.

According to records of ancient Chinese history, the armies of the Chu and Song states were facing each other in readiness for battle in 630 BC when a Chu warrior, Xiong Yiliao, stepped into the space between them and started juggling nine balls at once. Presumably he didn’t drop any, because the Song troops were so astonished and intimidated, they turned and fled, giving complete victory to the Chu army.

Since its International Jugglers’ Day on April 18, we thought it was the ideal metaphor for risk management professionals who are required to keep a lot of ‘balls in the air’ in addressing the compliance requirements and reputational risks relating to bribery and corruption, money laundering and terrorism financing, and forced labor in supply chains.

The right tools and sources can help you juggle all these balls by enabling in-depth due diligence and comprehensive audit trails of investigations to meet regulators’ expectations.

Grabbing risk management with both hands

Stretching the metaphor further, we note that Xiong Yiliao was surely juggling with both hands. We’ve covered the due diligence hand and suggest that the other hand represents ongoing monitoring. Because in the complex times we are faced with, a comprehensive approach to risk mitigation requires both these hands, working in unison with seamless continuity.

Expert jugglers practice until they reach what could be called a state of ‘mental automation’. It’s simply not possible to think individually about each of the balls being juggled; the brain’s autopilot must kick in.

Similarly, monitoring is best achieved with sophisticated automation and embedded analytics and visualizations around PESTLE factors, negative news, sanctions, company financial data and more. When monitoring surfaces a potential threat, it gets tossed back to the other hand for an enhanced due diligence check.

We don’t know what the battlefield looked like when the Chu and Song armies faced off in 630 BC, but we’re well familiar with the regulatory landscape that today’s compliance and due diligence warriors must contend with.

And it’s anything but stable, open ground.

It’s highly complex, increasingly international and changing very quickly, with new laws being introduced, additions and amendments coming into play, and decisions being made in courts of law that set precedents, clarify interpretation and indicate how evidence of prior corporate behavior can affect leniency or severity in the setting of penalties.

The expectations enforcement agencies have regarding corporations’ due diligence and monitoring obligations are on similarly shifting ground.

In this context, even the UK’s Bribery Act 2010, introduced to consolidate, clarify and strengthen UK anti-bribery law, seems like long-established legislation although it’s less than a decade old.

The evolving nature of the due diligence/compliance landscape—including the intensifying vigilance of increasingly empowered enforcement agencies—is further exemplified in the Hughes Hubbard & Reed report highlighting “investigations and enforcement actions of note” brought by the UK’s Serious Fraud Office in the past two years. They involve a range of issues and entities, including Liberty Media (the ultimate owner of Formula 1), British American Tobacco, mining giant Rio Tinto, Rolls-Royce and Airbus Group.

The balls are in the air. But in this case, the opposing enemy won’t be turning and fleeing any time soon.